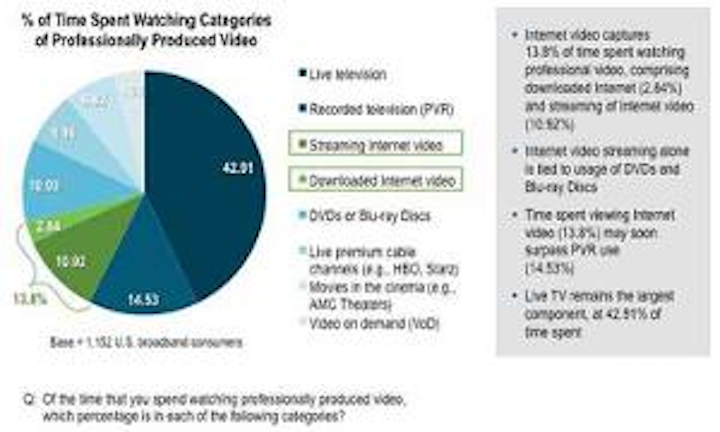 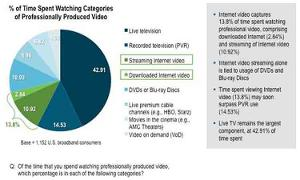 According to research by Cisco (NASDAQ:CSCO), 70% of U.S. broadband users are watching professionally produced Internet video every week, with an average viewing time of more than 100 minutes per week. Among 18- to 24-year-olds, viewership rises to 94%. Overall, streaming video is ahead of downloading and about even with DVDs and Blu-ray discs.

While broadcast TV still rules, 48% of consumers have increased their streaming of professionally produced video content in the past two years, making it the fastest-growing category of video use. Internet video streaming is expected to continue to grow in the future.

Average Internet viewing of professionally produced content - via both streaming and downloading - stands at 13.8% of viewing time, and may soon surpass PVRs (14.53%).
Latest in Streaming Video

Linear TV or streaming: Why not both?

According to a multinational survey conducted by IHS Markit, the smartphone has taken a major step in its evolution from a voice-centric device to a media-centric platform, with ...
BTR Staff
Sep 13th, 2019

According to the NPD Group, whether it's from a pay TV service, streaming video, or over the air, nearly everybody (91%) in the United States watches TV and movies. Watching ...
BTR Staff
Sep 12th, 2019

At IBC2019 in Amsterdam, DVB, an industry consortium that develops open interoperable technical specifications for the delivery of digital media and broadcast ...
BTR Staff
Sep 10th, 2019

Video streaming a key driver for 5G in the U.S.

According to a survey by IHS Markit Digital Orbit, the 5G era is set to drive the next wave of growth in video streaming, with 78% of U.S. consumers indicating they will expand ...
BTR Staff
Aug 30th, 2019

Bridge Technologies has become a member of the SRT Alliance, a collaboration to develop the SRT (Secure Reliable Transport) protocol and technology stack for low ...
BTR Staff
Aug 30th, 2019

According to the Leichtman Research Group, 74% of all U.S. households have a subscription video on demand (SVOD) service from Netflix, Amazon Prime, and/or Hulu ...
BTR Staff
Aug 27th, 2019

At IBC2019 in Amsterdam, SSIMWAVE will be demonstrating publicly for the first time its capability to inspect Dolby Vision high dynamic range (HDR)-enabled content for file ...
BTR Staff
Aug 23rd, 2019