Get ready for next-generation PON

At one point, cable operators wrestled with how to bring the bandwidth capacity of their hybrid fiber-coax (HFC) networks on par with all-fiber approaches. The arrival of DOCSIS 3.1 technology, which supports 10 Gbps downstream and soon symmetrical 10 Gbps via Full Duplex DOCSIS 3.1, may leave operators of first-generation passive optical network (PON) fiber to the premises (FTTP) infrastructures to wonder if the problem is now reversed. Fortunately, 10G EPON has been available for several years, and a GPON-based equivalent has arrived in the form of XGS-PON. Both technology camps have next-generation iterations either in development or ready for the field that promise multi-wavelength capabilities that will boost per-fiber capacity beyond 10 Gbps. 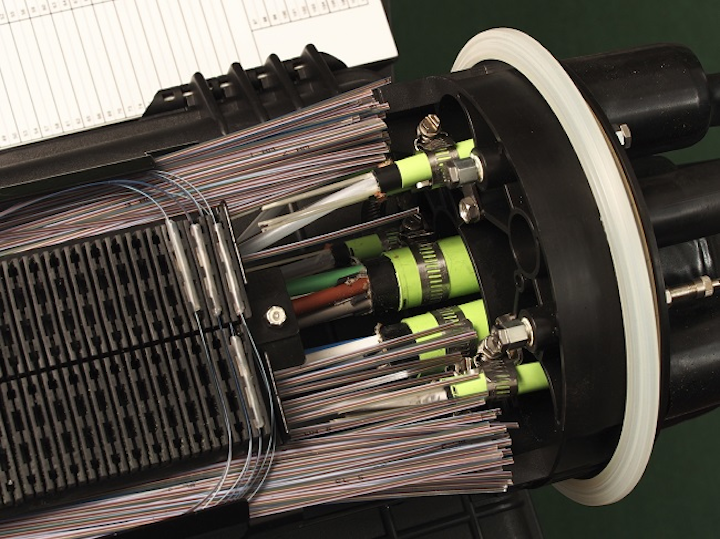 At one point, cable operators wrestled with how to bring the bandwidth capacity of their hybrid fiber-coax (HFC) networks on par with all-fiber approaches. The arrival of DOCSIS 3.1 technology, which supports 10 Gbps downstream and soon symmetrical 10 Gbps via Full Duplex DOCSIS 3.1, may leave operators of first-generation passive optical network (PON) fiber to the premises (FTTP) infrastructures to wonder if the problem is now reversed.

Fortunately, 10G EPON has been available for several years, and a GPON-based equivalent has arrived in the form of XGS-PON. Both technology camps have next-generation iterations either in development or ready for the field that promise multi-wavelength capabilities that will boost per-fiber capacity beyond 10 Gbps. PON vendors also have their eyes on the evolution toward Distributed Access Architectures and the role FTTP systems could play.

XGS-PON (ITU-T Recommendation G.9807.1) offers symmetrical 10-Gbps transmission, with the downstream channel transmitted between 1575 and 1581 nm (nominal 1577 nm) and upstream channel occupying 1260 to 1280 nm (nominal 1270 nm). The channel plan enables XGS-PON traffic to travel on the same fiber as GPON traffic, enabling both efficient use of the physical plant and a graceful evolution toward the higher transmission rate. Some view XGS-PON as a successor to the infrequently deployed XG-PON1 (sometimes called NG-PON1), an earlier specification that supports 10 Gbps downstream but only 2.5 Gbps upstream. The lack of symmetry in the upstream and downstream capacities is likely the main reason XG-PON1 hasn’t gained much traction in the field.

XGS-PON technology is readily available from PON systems vendors, and deployments have begun. Meanwhile, NG-PON2, the next step in high-capacity FTTP, also has reached the fielding stage. The technology, as outlined in ITU-T Recommendation G.689, uses time- and wavelength-division multiplexing (TWDM) to enable multiple 10-Gbps PONs to share the same fiber. Initial implementations focus on four such PONs, which means a total capacity of 40 Gbps per fiber in both the upstream and downstream directions.

The multi-wavelength capabilities offer several potential benefits. Business and residential traffic could run on separate wavelengths, and operators can shift subscribers from one wavelength to another in support of in-service upgrades or to restore services in the face of wavelength-specific outages. In open access network applications, different service providers could operate over their own wavelengths. Wavelengths can be bonded to increase the capacity available per subscriber as well.

The tricky part, from the cost and technology viewpoints, is the fact that the optical network terminal (ONT) at the customer premises needs the ability to receive and transmit on multiple wavelengths to avoid truck rolls each time network operations require a wavelength change. That means tunable transceivers. Tunable optical modules have settled quite nicely into long-haul and metro fiber-optic network applications. However, the access network offers a significantly different economic environment, and the industry has had trouble meeting the cost requirements of NG-PON2.

Nevertheless, Verizon has served as the technology’s operator champion, particularly in the United States. The service provider launched an NG-PON2 RFP in October 2015 after a series of field trials of NG-PON2 prototypes. Verizon narrowed its potential supplier list to two in July 2016: ADTRAN and a team of Calix and Ericsson. The operator has put both the technology and its supplier finalists through their paces since then. It has had the vendors demonstrate interoperability with multiple ONT sources based on Verizon’s OpenOMCI specification, which defines the OLT-to-ONT interface, as well as with each other. The company also has seen at least one demonstration of channel/wavelength bonding.

Throughout the process, Verizon has demonstrated a preference for disaggregated hardware platforms compatible with a software-defined networking (SDN) approach to the access. Calix announced this past January that Verizon would begin roll outs of NG-PON2 based on the vendor’s hardware in the Tampa area early this year.

Other operators, meanwhile, are at least giving NG-PON2 a look. CenturyLink conducted a field trial with ADTRAN’s OLT last year. Calix reports that OzarksGo, a telecommunications subsidiary of Ozarks Electric Cooperative that serves Northwest Arkansas and Northeast Oklahoma, has decided to deploy its NG-PON2 gear. Given the compatibility among GPON, XGS-PON, and NG-PON2, it’s not surprising that a major trend among systems providers is to support all three variants via the same OLT.

Both Calix (left) and ADTRAN (right) have offered disaggregated NG-PON2 OLTs to Verizon.

For cable operators, both EPON and 10G-EPON benefit from DOCSIS Provisioning of EPON, making the technologies easier to integrate into their networks. And several U.S. cable MSOs have done just that, with Bright House Networks (now part of Charter) among the first. Systems are available from a host of vendors, with a recent tie-up between Sumitomo Electric (which introduced 10G-EPON to the United States in 2014 and enjoys the market share lead here) and ADTRAN reshaping the market.

However, the advent of Full Duplex DOCSIS 3.1 puts HFC on equal terms with 10G-EPON and, as the ITU-T recognized in creating NG-PON2, bandwidth demands promise to continue to expand. The IEEE has stepped up with work on 100G-EPON under the aegis of the IEEE P802.3ca Task Force. As its name implies, the Task Force set out to define a way to enable 100-Gbps EPON architectures, as well as 25- and 50-Gbps versions. The fact that CableLabs’ Curtis Knittle serves as the Task Force chair signals the importance of the standardization effort to the cable community.

The standard isn’t scheduled to be ratified until the first half of 2020, but progress is being made, as the meeting notes on the Task Force webpage make clear. In its January 2018 meeting, the Task Force decided not to pursue a 100-Gbps EPON specification due to the technical challenges of supporting such capacity over a single fiber and the complexity of doing so via two fibers. Both 25G-EPON and 50G-EPON remain in play, as does the use of multiple wavelengths. Unlike its NG-PON2 counterparts, however, the IEEE Task Force plans to avoid the use of tunable transceivers.

As they increase the capacity of PONs, members of the technology’s community also have their eyes on the role PON hardware might play in future Distributed Access Architectures. OLTs could reside in the remote node and support either a Remote PHY or Remote MACPHY approach, particularly in a scenario where an operator wishes to transition from HFC to full fiber. The last two SCTE Cable-Tec Expos have seen PON equipment suppliers discussing such scenarios in their booths on the back of new technology.

DOCSIS 3.1 and Full Duplex DOCSIS 3.1 promise to keep HFC infrastructures useful for many more years to come, with all-fiber networks reserved for greenfield applications. But as the promised benefits of next generation PON technology become available, they may make certain brownfield applications look a little bit greener to the network planner.

According to Parks Associates, TV sets still dominate home entertainment, accounting for more than one-half of all video consumed by U.S. broadband households each week. The ...
BTR Staff
Jan 27th, 2020

Midco is expanding the reach of its broadband services to areas of Minnesota that are unserved or underserved, with financial assistance from the state. Midco has been awarded ...
BTR Staff
Jan 24th, 2020

Grain Management has completed its acquisition of a majority interest in Summit Broadband from Cable Bahamas. Terms of the deal, originally announced in August ...
BTR Staff
Jan 24th, 2020