HEVC: Getting Ready for the Big Squeeze 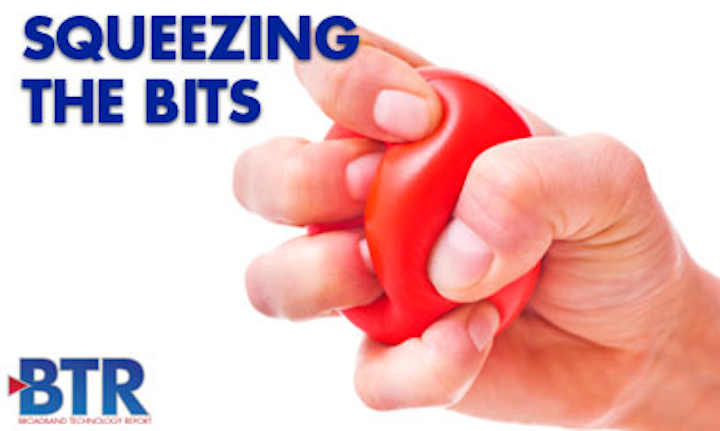 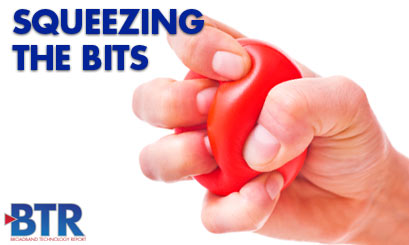 Progress clearly is accelerating on the new codec, which also goes by the moniker H.265. While there is no shortage of things for which cable operators must plan, determining the most prudent way to integrate HEVC during the next few years should be a major bullet point on their agendas.

All of the codecs employ compression technology to reduce the amount of data that must be transmitted in order to create the image on the end user's device. The transitions in codecs essentially trace improvements in the compression algorithms’ ability to boil out bits. A main approach to compression is to avoid retransmitting bits that don't change between frames. Formerly, the size of the blocks that could be automatically duplicated from one frame to the next was set.

One of the ways that HEVC makes its gains - which experts say is a 50% savings over MPEG-4 - is to allow variations in the size of the blocks that can automatically be replicated. “At the highest level, it has more intelligence to only provide attention to areas that that are high motion and that are very, very dynamic," said Ryan Taylor, the director of product marketing at Rovi(NASDAQ:ROVI). "[In older versions of MPEG] macro blocks are fixed. In HEVC, coding units can get bigger or smaller. There is the ability to have more granularity on how to focus on the picture."

The emergence of the powerful codec is felt in two ways: Service providers can use it to transmit the same programming in half the bandwidth previously used, or to deliver content that holds twice as much data in the same bandwidth.

Both are attractive options. The most immediate impact will be on the wireless side. Currently, wireless networks are bending under the weight of the amazing amount of video that subscribers are downloading. The near-term benefit of HEVC is that it will cut the needed bandwidth for transmission of a set amount of video. "In my opinion where telcos have networks, they can optimize and where they are paying a lot for bandwidth I think is the first place we will see it,” said Mike Callahan, Elemental Technologies’ director of product marketing.

Marios Stylianou, Envivio's (NASDAQ: ENVI)director of marketing, also sees wireless providers as the first movers on HEVC. “In general, any operator - whether telco, cable or satellite - could benefit from HEVC because of bandwidth savings,” Stylianou said. “This is something they always strive to accomplish. With that said, in terms of priority, between the [wireless arms of the] telcos or cable we do see more immediate needs for telcos at the moment."

At the same time, cable operators will be moving ever more quickly into second- and third-screen endeavors. For that reason, the wireless side of the business may evolve to HEVC more quickly than the wired side, especially considering that software-based decoders in handsets will be available.

The second wave of HEVC - but one that must be planned for now - focuses on operators' wireline infrastructure. It is at this point that the other side of the value proposition - the ability to squeeze more data into a set amount of bandwidth - comes to the fore. One of the next big things in video is super high definition, which roughly doubles the amount of pixels in the image. The reality is that there is no practical way to offer such a service without HEVC.

The bandwidth demands simply would be too great. Thus, cable operators must consider their path forward on Super HD. It also is likely that at least some of the industry’s wireline telco competitors will move to HEVC with alacrity. In addition wanting to get into the Super HD game, many telcos rely on DSL modems, which have lower throughput than cable modems. Thus, they are pushed by both advantages of HEVC: saving bandwidth and making advanced services more feasible. In reality, that will push the cable operators as well, since they will have to keep pace.

The decisions surrounding HEVC rollout on the STB side will be even stickier because STBs based on MPEG-4 or earlier codecs cannot be upgraded to HEVC. This appears to be an area in which operators will not move in lockstep. “Most North American operators have not migrated to MPEG-4 and some of them are looking at whether they should skip it or whether it is too long before HEVC is ready for prime time,” said Yaron Raz, the director of digital video solutions for Harmonic (NASDAQ:HLIT). “There is about a 40% penetration of MPEG-4 boxes, and definitely some are moving more aggressively on it today. For others, they may try to leapfrog to HEVC. This is a tradeoff each has to think about.”

Carl Weinschenk is the Senior Editor of Broadband Technology Report. Reach him at carl@broadbandtechreport.com
Latest in Headend & Hub