The Long(er) and Winding Road to IMS 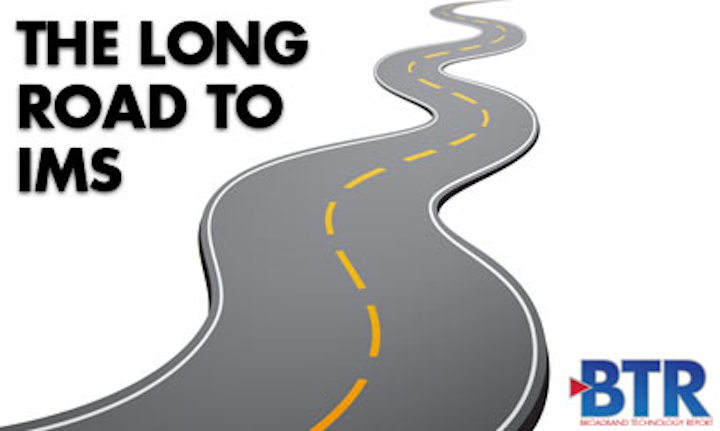 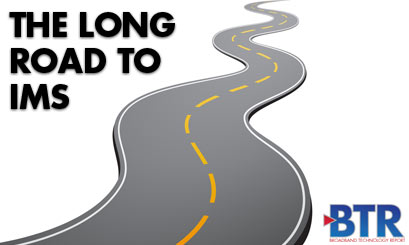 The next great phase in the annals of telecommunications infrastructure is the IP Multimedia Subsystem, or IMS. The question is the extent to which the cable industry adopts this new approach.

As the name implies, IMS is based on use of the Internet protocol. The idea is that using IP as the base communications language for everything - from content to apps and management data - will eliminate the demarcations between wireless and wired networks. It also will enable the mounting of new services in far more modular and simpler fashion. Once an IMS core is up and running, services can be inaugurated or ended by simply adding or eliminating application servers. A side benefit is that the spectrum formerly dedicated to 3G voice can be utilized for other purposes.

The drawback is that the implementation of IMS is not a tweak. It is a fundamental change-out deep within the network that involves significant investment and planning. Often, such projects are justified by a "killer app" against which the project can be planned. In the case of IMS, the clear killer app is Voice over Long Term Evolution (VoLTE). The early days of 4G service - days that continue for almost all carriers today - featured LTE networks that carried only data. Voice continued to be trafficked on 3G. Transitioning mobile voice to 4G is an important - and some would say necessary - step for carriers.

In early August, three telecommunications carriers - SK Telecom and LG Uplus in South Korea and MetroPCS in the United States - introduced VoLTE. Indeed, it was a bit of a space race, with the three companies announcing their services in a span of a couple of days and controversy erupting over who was first.

Regardless of which carrier won, the reality is that the news meant that the era of IMS had arrived.

The challenge for cable operators is that, by and large, they opted to bypass the VoLTE killer app as the justification to move into IMS. By and large, the cable industry has passed up the idea of a native smartphone business. The biggest step the industry has taken into the smartphone business is the partnerships that Time Warner Cable, Cox and Comcast have struck with Verizon Wireless. The approach of teaming with a traditional foe in a manner in which the strength of each is leveraged indeed may be savvy. But it removes the need to rebuild the network in a way that is optimized for wireless voice services. The killer app, in other words, is dead.

Industry analyst Alan Qualye said that about two years ago cable operators began considering IMS as a replacement for their interim softswitch strategy. The initial burst of enthusiasm - which led to lab tests and field trials - has chilled as the mobile voice plans went on hold and the complexity of IMS deployments became clear. Many of those initial plans have stalled. Rogers, Qualye said, is an exception because it offers its own mobile voice service and therefore has the same justification as the cellular carriers.

While the timeline for IMS may be lengthening, it is not a dead issue for cable operators. A driver - perhaps not as potent as voice services, but a driver nonetheless - is PacketCable 2.0. The standard assumes the availability of IMS. This, said Diane Myers, the principal analyst for VoIP, UC and IMS for Infonetics Research, is keeping IMS on track. "The cable operators may not be leading the way, but are progressing quite quickly in terms of IMS networks," she said. Myers wrote a research report released earlier this month that had mixed results for the worldwide IMS market: It was down 4% in the third quarter of 2012 compared to the second quarter, but up 8% over the third quarter of 2011.

Shailin Sehgal, CTO of Genband's networking business unit, said top MSOs in the United States are engaged in either lab trials or friendly-user tests. Sehgal said IMS will provide the multimedia functionality for PacketCable 2.0 and therefore is an inevitable step for cable operators.

Initially, the decision to move to IMS may have been made with mobility in mind, but the basic abandonment by much of the industry of a native mobile service has switched - not eliminated - the impetus. "Most CTOs in the cable industry in North America have pretty much decided that IMS is the core network they need to build for PacketCable 2.0 for multimedia services," Sehgal said. "Mobility has nothing to do with it."

Carl Weinschenk is the Senior Editor of Broadband Technology Report. Reach him at carl@broadbandtechreport.com.
Latest in DOCSIS