DOCSIS evolution and the bridge to 10G

Cable operators must consider how to migrate from the hybrid fiber/coax (HFC) and DOCSIS networks of today to the 10G DOCSIS HFC networks needed in the future. For ... 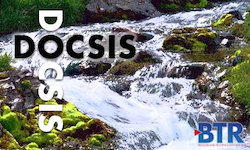 Cable operators must consider how to migrate from the hybrid fiber/coax (HFC) and DOCSIS networks of today to the 10G DOCSIS HFC networks needed in the future. For many, this appears to be a monumental evolution. For others, the technology impacts are nothing short of revolutionary.

Let’s consider an example from a different world: three bridges cross the Firth of Forth, an important estuary in Scotland.  Each successor bridge was built quickly, by public-works standards, after its predecessor; the bridges tell the story of technological progress and investment.

The sweeping suspension design of the second bridge existed during the construction of the first, but the technology needed to improve to make the project viable.  During the construction of the first bridge, and the short years thereafter, the technology of suspension bridges improved iteration-after-iteration such that the second bridge was built faster and cheaper than the first.

The design of the third and newest bridge, a cable-stayed bridge, was based on an ancient architecture concept made anew by technology improvements realized throughout the construction of the second bridge.  Started 50 years after the second bridge, the third bridge is longer, cheaper, and was built faster than the second.  Each new bridge did not invalidate the previous, and during construction of each, the technology of the time marched on, but all three bridges enabled new economies and are still in heavy daily use.

Coming back to 10G, year after year DOCSIS technology improves, each iteration building on the foundations of the version that came before:  a success story of innovation over iterations.  Like the bridges, operators will be deploying current generation DOCSIS technology while actively innovating on the next.

Integrated CCAP (I-CCAP) chassis are widely deployed and have a long service life ahead of them in some regions and some use cases.  The I-CCAP allows legacy components to be combined in a familiar way, and outside plant operations to happen in a familiar way, and capacity to be increased in a familiar way.  This familiarity comes at a price in service offerings, in competitive advantages, and freedoms of network design.  This is your first bridge.

Remote-PHY is a simple concept of moving the physical layer to the edge of the network, made manifest over the last five years through standardization efforts, silicon advancements, and multi-vendor cooperation.  While not the familiar way, an R-PHY based Distributed Access Architecture (DAA) provides new opportunities for operators through the use of Ethernet-based digital fiber and PHY processing at the edge: reduced hub space and power, improved RF capacity, and vast improvement in fiber utilization to support convergence of business, wireless, and residential services. This is your second bridge.

Remote-MACPHY (FMA) is a concept at least as old as R-PHY, but in need of technology iteration and industry standardization to meet all operator requirements.  A Flexible MAC Architecture allows the DOCSIS MAC to be disaggregated from the PHY and IP routing, allowing operators to build best-of-breed switching and access networks.  Operator networks can be simplified by reducing the impact of DOCSIS on the switching network, aligning DOCSIS access with other technologies such as PON, and further minimizing the demands for hub space and power. This is your third bridge.

Mixed-technology networks are, and should be, the expected network architecture of DOCSIS today and into DOCSIS 4.0.  This mix of technology covers both broadband data delivery and the evolving world of IP video, where a bridge from QAM delivery to IP delivery is needed and enabled with centralized origin, storage and caching platforms.  Just as new bridge investments did not invalidate the old, new DOCSIS and video technologies must be layered into currently deployed networks.  DAA is a key architecture for enabling the 10G vision and flexible access technology a key mechanism to achieve that vision.  Operator networks are and will be mixed networks; With I-CCAP, RPD, FMA, PON, IP video, and 5G all operating side-by-side, with each investment providing service now and into the future.

Technology always improves, relentlessly marching forward.  During the construction of each bridge over the Firth, the idea and concept of the next bridge was known and technology under heavy innovation. Without the first bridge over the Firth, there may never have been a second.  Each design required a new type of technology, each bridge opening unlocked new economic prosperity, and each investment is still in use today.  These bridges tell us a story of seizing and solving today’s problems with today’s technology to ensure a secure environment for the next, and that existing investments play a key role in the vision of the future.

Colin Howlett is VP of architecture at Vecima. Doug Johnson is senior software architect at Vecima.